Ride Of Your Life is an adventure-travel web series that takes you to the edge. Produced by First Drum Films (a subsidiary of Inicia Incorporated) and co-sponsored by Incognito Worldwide, it takes viewers vicariously along on exciting motorcycle rides, combining history and investigative journalism and interviews to explore people and places.

My Journey Through India blog shall always be free, as will this site. Basic subscription on our TV page is $2 a month (scaling upwards with gifts, credits and perks) launching in Oct 2017.

Bruce arrived in India in 2012 and remained for 5 years. He runs Incognito Worldwide, and along with company directors Nihanth Kandimalla and Kiran Kumar. They work hard and play hard, documenting their travels and explorations.

While we interview and reviews people and places, we look for exciting roads to motorcycle on so that you -- our viewer -- can enjoy the spectacular scenery thta India can provide.

There are places we've gone whereby knowing the history of a place or event that took place there brought the visit to life. While our goal is to WOW you with adventures by motocydcles, we aim to also bring insight and reveal stories of interest.

By becoming a patron (click the title) you help bring adventures to life for the cost of a monthly cup of coffee. Initially self-funding the venture the guys hope to deliver fun and interesting videos that will attract and earn viewer support. 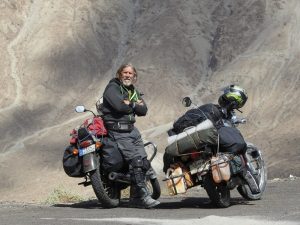 Facebook Twitter Google+ Pinterest
Bruce Dugan
On camera, producer-director
Bruce financed the trip and filming and drafted the story outlined, which has since changed after the mishap in Kashmir. He also directed the Indian segment of the film, while he and Nihanth both partook in capturing the video footage. He rode his Royal Enfield Thunderbird. 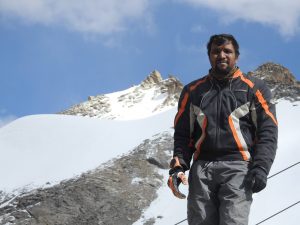 Facebook Twitter Google+ Pinterest
Nihanth Kandimalla
On Camera, photographer
Nihanth, originally from Ballari, India, moved to Bangalore when he became a director at Incognito Worldwide (https://inwwc.com, a subsidiary of Inicia Incorporated. He scouted and scheduled all the stops during the ride, partook in capturing video footage, and captured most of the still photos. He rode a Royal Enfield Thunderbird. 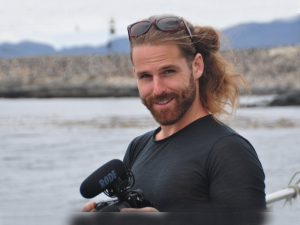 Facebook Twitter Google+ Pinterest
Jordan Urbanovich
Director, Videographer, Editor
Jordan was unable to meet up in India for the Himalayan ride. and postproduction never happened in Goa as planned after the mishap in Kashmir. So he joined the project 2 years later when he and Bruce traveled to the END OF THE WORLD in Argentina to complete principal photography for the documentary.
Principal Photography
Interviews & VO
Editing
Distribution